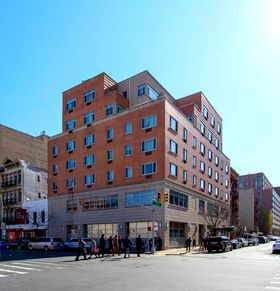 The social justice nonprofit Getting Out and Staying Out has landed a deal for almost 18,500 square feet of space in East Harlem, providing a slight boost to Manhattan’s office market as it continues to struggle amid the pandemic.

GOSO, which focuses on supporting the needs of the formerly incarcerated and others who have been involved with the criminal justice system, has secured a 10-year lease at 2283 Third Ave., near East 124th Street. Asking rents were in the mid-$40s per square foot, and the nonprofit plans to move into the building during the first quarter of next year.

The nonprofit will occupy the property’s lower level, first floor and second floor. GOSO is based nearby, at 75 E. 116th St., but it has outgrown that space because of an increased demand for its services.

“We look forward to moving into a larger space that will allow us to serve more participants citywide and increase services for our current clients,” GOSO President Jocelynne Rainey said in a statement.

Powers said his firm was “thrilled to help bolster the nonprofit community during these critical times.”

Rockfeld Group purchased 2283 Third Ave. for $20.5 million in 2014, according to property records. The seven-story building has about 51,000 square feet of space overall, and its upper floors house graduate students attending the New York College of Podiatric Medicine.

Activity in Manhattan’s office market has remained slow even as the city continues its gradual reopening. In August 1.3 million square feet of office space was leased; if this rate continues, 2020 will have the lowest leasing volume of any year so far this century, according to a recent report from Colliers.

A recent survey of the city’s top employers found that only a third of the city’s workforce plans to return to the office by the end of the year.