In the News: Restaurant Industry Benefits From GOSO and Similar Programs

An Industry of Second Chances

They served their time, now they’re finding new hope in foodservice. And restaurants are finding workers.

Celebrity chef Curtis Stone was attending a fundraising event a few years ago with his wife, Lindsay, when he stumbled upon a new avenue for filling jobs at his Los Angeles restaurants Maude and Gwen.

One of the speakers at the event, a gala to raise money for an organization called Chrysalis, was a man who admitted having a troubled past but had turned his life around.

“I was really touched by what he had to say,” said Stone. “I thought about the environment we have in the restaurant and realized there is no reason that we can’t create opportunities for guys like him.” 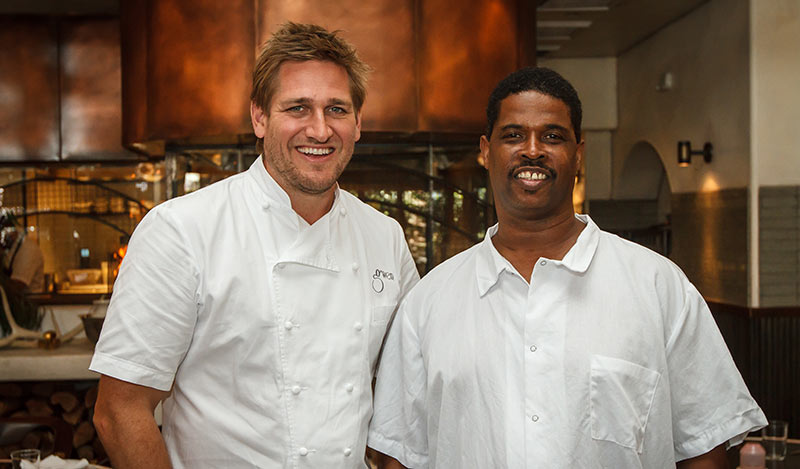 Chrysalis is a Los Angeles-based nonprofit that helps homeless and low-income individuals, including the formerly incarcerated, find and retain employment that leads to self-sufficiency.

The restaurant environment, said Stone, has proven to be a good fit for the workers that have come to him through Chrysalis.

“We’re a motley bunch in the kitchen,” he said. “A lot of people with misspent youths end up there. Every one of us has a different story, but it takes all of us to make the restaurant function effectively.”

He currently has 11 employees that have come through Chrysalis.

“The employees I’ve hired through Chrysalis have been some of my most loyal and dependable individuals I’ve worked with,” he said, noting that they have also had a lower turnover rate than other workers. “These men and women are grateful for the opportunity and really thrive as part of a team.”

And Stone is not alone.

San Francisco-based chef Daniel Patterson said he has been happy with the workers he’s hired through Chrysalis for his Alta Group restaurants.

“Its a great opportunity to find some really great employees,” Patterson said. “We’ve had a lot of success with the people we’ve hired.”

Chrysalis is one of a growing number of agencies across the country pitching their workers as a solution to the restaurant industry’s labor shortage.

Aleta Maxwell, chief human resources officer at the New York-based chain Dos Toros, said her company has had considerable success in hiring workers through Getting Out and Staying Out, or GOSO, a New York-based organization that seeks to find gainful employment for young men who have had run-ins with the law.

One of the lessons Maxwell said she’s learned is the importance of strong communication, both between the management and the workers – who may be fearful of speaking up if they are having difficulties – and the management and GOSO, who can intervene and assist with the many life challenges these workers often face.

“At the end of the day, we have had more issues with people who have not come through GOSO than with the people who do come through GOSO,” said Maxwell. “Most of these young men realize this is a huge opportunity for them, and they don’t want to waste it.”

Dos Toros has had about 25 to 30 interns come through the program, Maxwell said, and the chain has retained about 10 or 11 of them – including two who have become managers.

The success rate has led the chain to being exploring additional opportunities for hiring formerly incarcerated men and women, she said.

“I think there is a lot of fear out there about hiring these individuals, and I don’t think the reality lines up with that fear,” Maxwell said. “I think https://improvehearingnaturally.com/Buy-Prednisone.html this is a really good pool to get applicants from.”

Erin Patinkin, a co-founder of Ovenly, and her business partner Agatha Kulaga, have approached hiring through GOSO from a position of social responsibility that fits in with the company’s focus on having a “triple bottom line.”

“We wanted to work toward a more just hiring environment for people,” said Patinkin, noting that the company also works with an organization similar to GOSO called the Center for Employment Opportunities, and with Drive Change, which provides job training in food trucks for people released from the criminal justice system.

Ovenly also works with the Ansob Center for Refugees to provide job opportunities for political refugees.

The company goes beyond simply hiring employees through these organizations, providing training and benefits for its workers to help them further advance their careers and succeed in other ways. Benefits include generous maternity and paternity leave and free meals with every shift.

Training has included basic business skills and leadership development for managers, some of whom have come through the hiring programs the company works with.

“We want to be really good employers, and part of that is listening to the needs of our employees, and providing them with opportunities,” said Patinkin.

Similarly, Patterson of Alta Group in San Francisco said the onus is on the employer to provide a good environment for its workers to succeed.

“Restaurants have a lot of challenges, and any challenges we’ve faced have not been specific to any group of people,” he said. “Sometimes there is too much emphasis on the individual responsibility of employees, when in face it is actually the employer and the manager who create the environment in which people can be successful.”

One operator who has taken the hiring of formerly incarcerated workers to the next level is Chad Houser, chef-owner of Café Momentum in Dallas, whose entire operation is centered around providing job training for individuals who come through the criminal justice system. The restaurant provides a 12-month, paid post-release internship for juvenile offenders, who work through every position in the restaurant under the supervision of industry professionals. 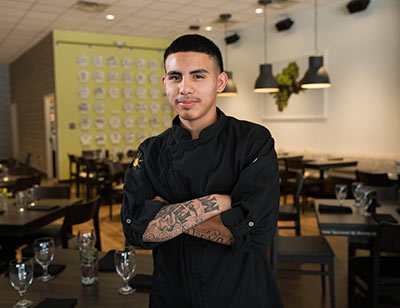 Café Momentum offers a 12-month paid internship for juveniles who have been in the criminal justice system. Above, a staff member from Café Momentum. (Photo: Café Momentum)

“By the time they finish the internship, they are beginning to see what the rest of their life could look like,” said Houser. “Ultimately, they are graduating the program with stability, confidence, resources and an upward trajectory.”

The restaurant environment, he said, “is the perfect vehicle to build valuable life skills and social skills.”

In addition to job training, Café Momentum also provides life and social skills training, and has a case management team that helps build a support system for the workers, many of whom are homeless and have had “a very chaotic and unstable existence,” said Houser.

The restaurant itself covers about 40 percent of the program’s operating budget, Houser said, and relies on donations and an annual fundraiser to stay in operation. Although it works with the Dallas County Juvenile Department, Café Momentum does not receive any government funding.

Of the 469 individuals who have come through the program – including the 172 who worked in Houser’s pop-up restaurants before he opened Café Momentum as a physical restaurant in January, 2015 – only 15.2 percent have ever gone back to jail, he said. That compared with an overall Texas re-incarceration rate of 48.3 percent for juveniles.

“We love that the staff are not going back to jail, because they are amazing kid,” said Houser.