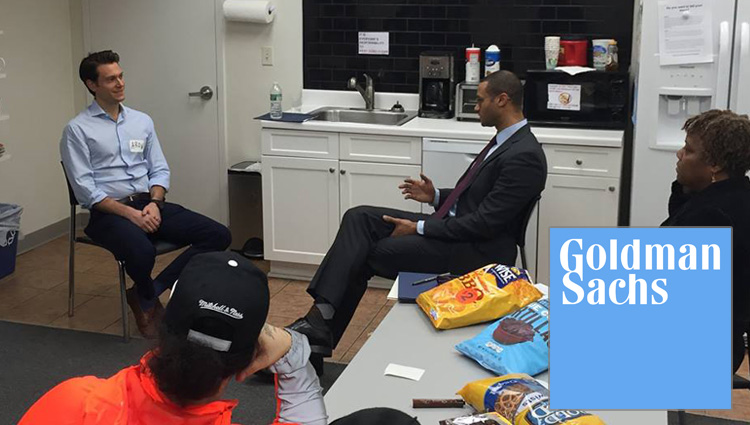 Reginald Andre and Daniel Goldberg, vice presidents in the Investment Management and Merchant Banking divisions, respectively, have more than 20 years of combined experience at the firm – but they met for the first time at a nonprofit event in 2014 that was organized by Getting Out and Staying Out (GOSO). Reg and Dan shared an interest in helping previously incarcerated young men get on a path to success – a population served by Harlem-based GOSO since 2003.

“Many of the guys don’t expect to have opportunities,” Reg said, explaining that the organization uses “the guys” as a term of endearment when referring to its participants. “The GOSO staff are often the first people in the guys’ lives to tell these men there are opportunities out there for them, and that if they’re willing to work hard, GOSO will be here to help position them to seize those opportunities.”

Reg and Dan now connect regularly as active board members of GOSO, which seeks to reduce the recidivism rate of previously incarcerated young men in New York. The nonprofit offers a holistic program comprising social and emotional counseling with licensed social workers, provides educational opportunities to help clients earn a high school diploma (or equivalent) or a college degree, and partners with potential employers to grant interviews to the GOSO pool of candidates.

Last year, Reg and Dan organized a Community TeamWorks (CTW) workshop with GOSO that enabled Goldman Sachs professionals to make an impact in the community by leveraging their expertise to lead participants through financial literacy, job readiness and networking exercises.

“The response we got from the volunteers was overwhelmingly positive, and we realized there was something there, in terms of reinvesting in the community what the firm has invested in us,” Dan said. “Based on its success, the CTW will now be held annually.”

Since joining the GOSO board, Reg and Dan have led a number of results-oriented initiatives for the organization, including establishing a monthly volunteer program to help develop GOSO clients’ interviewing skills, revamping GOSO’s budgeting and financial oversight processes, and leading the planning effort for the nonprofit’s annual gala that is taking place on April 19.

“We pledged to each other when we started that we were going to avoid doing things just on a ‘best effort’ basis, and instead apply a Goldman mindset to our involvement,” Reg said. “We’re always looking to institutionalize best practices and to bring a quantitative angle where we can so that decisions are supported by analytics we trust.”

Reg and Dan find inspiration in the young men they serve, most of whom participate in GOSO programs voluntarily. Dan recalled the story of a young man who commuted a total of four hours each day to participate in an internship sourced and paid by GOSO at a bakery in Brooklyn. He has since been hired full-time at the bakery, is learning valuable skills and is able to support his family.

“He was so happy to have a chance to work and prove himself,” Dan said. “His story is typical of the many bright participants in the program who maintain a positive attitude, good sense of humor and incredible work ethic despite adverse circumstances.”

The two vice presidents noted that despite success stories, stereotypes about previously incarcerated young men continue to be a challenge. A GOSO staff member explained during a training exercise for volunteers that the nonprofit’s clients are mostly minorities who are undereducated and come from low-income communities. The staff member then asked volunteers to write down words commonly associated with individuals of this background.

“Suffice it to say that the words written were not those one would use to characterize someone who would go far in life,” Reg said. “Based on the exercise, we were asked to consider, ‘How do you think these stereotypes impact employers’ decisions to hire our guys?’”

Dan added, “The group was then asked, ‘How do you think this impacts how the guys view themselves and their ability to do something other than what they did in the past?’”

A Successful Framework for Reentry

Fewer than 10 percent of GOSO participants return to jail, compared to a national average of 67 percent for their age group.

“GOSO’s success, coming from its incredible staff and unique blend of services, helps to break the cycle of crime and poverty in New York, something we think everyone can get behind,” Reg said.

This year, Goldman Sachs is being honored at GOSO’s annual gala as the “Corporate Partner of the Year” for the time and resources that Goldman Sachs people have contributed to GOSO and its clients. Dan and Reg attribute this accolade to GOSO’s “infectious cause” and the firm’s “culture of excellence and service.”

“We’re making a market in the sense that there’s demand for professionals’ skills and time, and there’s a supply of it here at Goldman Sachs,” Reg said. “We put together great monthly volunteer programming that facilitates that exchange in a way that increases the number of people who interact with our guys, and it’s led to tremendous support within the firm.”

In the months and years ahead, Reg and Dan hope to create additional programs addressing the needs of previously incarcerated young men; partner with more businesses for employment opportunities; and recruit new volunteers who are passionate about making an impact in their community.

“Everyone has something that they can offer, so our goal is to raise awareness, attract additional support and put it to work effectively to help our guys advance on the path to financial independence,” Reg said. “Our guys continue to be surprised and excited that professionals come up to Harlem all the way from Wall Street just to work with them, so let’s continue to show them that people in our position care.”

Related Link – Learn more about Getting Out and Staying Out. 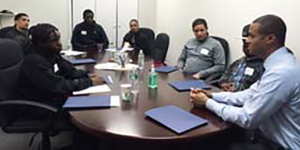 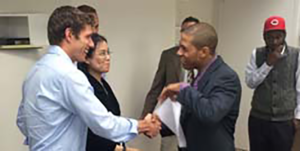 Reg mock interviews Chris Lvoff, a managing director in the Investment Management Division, during a monthly workshop with GOSO participants 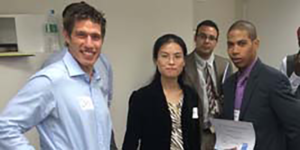 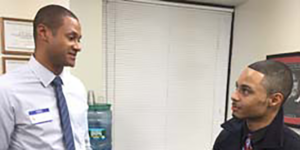 Fewer than 10 percent of GOSO participants return to jail, compared to a national average of 67 percent for their age group 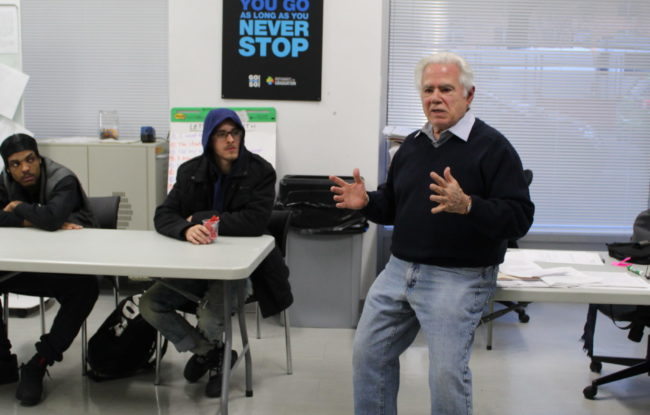