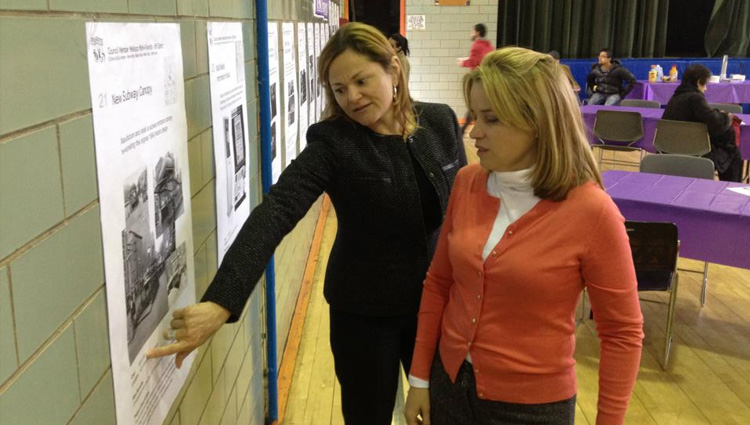 NEW YORK—As residents of East Harlem filed into the Johnson Community Center gymnasium Monday night, Latin music filled the air, and an array of food including meatballs and macaroni salad sat on a table set up on the basketball court. There would be no game—but anticipation was palpable in the room.

This is a celebration at the end of a process, Mark-Viverito explained.

Starting in October 2012, hundreds of community members across Mark-Viverito’s district—which spans from Manhattan to the Bronx—came out to pitch ideas in neighborhood meetings.

During the nearly six-month process, the ideas were pared down to 21 projects, all involving much needed community upgrades such as air conditioning for PS 72, playground improvements at multiple schools and parks, new laptops for several schools, and security cameras at three housing projects.

Timothy Paz, 21, does not live in District 8, but got involved through an organization called Getting Out and Staying Out (GOSO), an organization that provides education, job-readiness training, and community support to young men. Only 8 out of 51 districts offered participatory budgeting this year.

“It doesn’t matter that I’m not from here,” Paz, who lives in Brooklyn, said. “New York is New York.”

Paz partnered up with a group championing laptops in several schools, including special needs classes. During the process he visited many schools, where he took photos and spoke with students in need of laptops.

Paz said he was a special needs student when he was in school and he could understand how beneficial the resource would be for the students.

Corin Mills, 26, who also joined the project through GOSO, said he had his own ideas for what the community needed, but when he discovered that laptops was the top concern for the people he spoke with, he decided to support the group’s request for funding.

“I want to see these kids excel in this community,” Mills said. “I don’t want to see kids in this community not have access [to computers].”
To increase the odds of their project winning, nine schools were combined on the request, which is a first for New York City participatory budgeting.

The young men from GOSO huddled around anxiously waiting to see if their project would make the cut. When their project name was announced, the group erupted in cheers, hugs, and high-fives.

“This is incredible!” Cuevas exclaimed.

Cuevas and Paz vowed to see the project through to delivery, which could take months. All the young men from GOSO said they would take part in participatory budgeting again next year.

Passing the Torch
Council member Mark-Viverito was among the first four elected officials to use participatory budgeting in New York City. She has been an advocate of the process not just at home, but also abroad.

Mark-Viverito, who was born in San Juan, Puerto Rico, introduced the process to the newly elected mayor of her hometown, Carmen Yulin Soto. Soto campaigned against 12-year incumbent Jorge Santini, on a platform of transparency and co-governance, promising to bring participatory budgeting to her city.

Soto spent a week in New York City to learn from Mark-Viverito and was on-hand when the winners were announced. “It is important we build bridges between the city of New York and San Juan because there are more Latinos in New York than in Puerto Rico,” Soto said.

Soto said she will allot $1.2 million between four communities for capital projects.