Over the last decade the word empathy has become almost annoyingly ubiquitous. There are reasons for that: when a word with important meaning resonates with a lot of people, provoking a grass roots shift in perspective and action, companies, politicians and others do one of 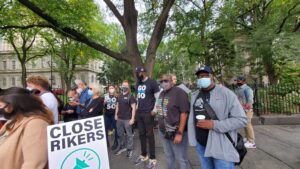 GOSO Staff who attended the Close Rikers Rally at City Hall on October 12, 2021.

two things: co-opt the word in order to muddy the waters of meaning and diminish its power (see “woke”), or jump on the bandwagon and use it to sell themselves or their products, thereby weakening the word. Empathy falls into the latter category.

Which is a shame and worth debunking!

So what does the word empathy actually mean, and how does it help move our work at GOSO?

Empathy originates from the Greek, “pathos”  which finds its origins in the Proto-Indo-European root, “-kwent” which means “to suffer”.

While we may think of empathy as putting ourselves in another’s’ shoes; it is not just about learning to understand each other by feeling what another feels, but specifically to choose to feel another person’s suffering. Instead of looking away, or separating ourselves as observers or othering the sufferer, choosing to step into their shoes with them and become one. If they suffer, I suffer; this is our suffering.

At GOSO, we don’t look away. We understand that we cannot remove ourselves, but can only help to end unjust suffering when we work together in community. That is no more obvious than the last few months’ policy and advocacy focus.

Last month, we were invited to provide feedback on the Youth Justice and Opportunity Act, which will be introduced in the next legislative session, and also asked to join the campaign. We are proud to participate in strengthening the bill and excited to fight for youth justice in New York alongside such legendary organizations as Youth Represent and The Children’s Defense Fund.

A little bit about the goals of the YJ&O Act: with the enactment of this legislation, New York has the chance to lead the nation by expanding its laws to protect the futures of young people under the age of 26, enhance community well-being, and provide emerging adults the opportunity to move forward in their lives without the barrier of a criminal conviction. The Act would also reduce State and local spending on youth incarceration—money that should be invested in communities to alleviate poverty and homelessness, ensure quality education, and fund other needed resources. In turn, this bill would help stabilize communities, promote community health, and increase public safety for all.

We have also been invited to join the campaign for the Challenging Wrongful Convictions Act, sponsored by Senator Myrie and Assemblymember Quart. We have written a Memo of Support and will officially join the campaign when it kicks off.

This legislation would ensure that:

We expect this legislation to be introduced in the next legislative session and look forward to fighting with the lead campaign organization, VOCAL-NY, to get it passed and signed into law.

So much has happened over the last month in advocacy work, especially related to the crisis on Riker’s Island. What has become clear is the all-out narrative war being waged between those who would like to see an ever-expanding carceral state and those who want to see an end to incarceration in our society.

In September and October, effective protest and awareness actions were organized by advocates like the Five Boro Defenders, Freedom Agenda and the Jails Action Committee. The former ran a successful action inside arraignment courts, calling attention to the responsibility that DAs, their teams and Judges bear for the deaths in NYC jails, and the rising pretrial incarceration rate. The latter orgs held rallies that brought a much larger awareness to what is happening on Riker’s Island specifically, and spurred extremely important reporting on what is taking place.

Both WNYC/Gothamist and the New York Post wrote revealing pieces on how this crisis has come to be and the conditions people are being subjected to on Riker’s Island.

It took very little time for pro-carceral orgs to strike back and currently, our community is weathering an onslaught of half-truths and lies from the NYPD, the DOC and city leadership regarding the crisis, especially their propping up of the patently false “rising crime” narrative. But this might be coming

But, we knew our work in this space will be focused on collaborating with coalition members and advocates to change the narrative by educating the public and naming and shaming elected and appointed officials who bear the largest responsibility for this humanitarian crisis. In the meantime, important reporting continues to inform the public on the convoluted structures in our city government that are so disempowered they have no say, or so disingenuous, they intentionally fail to keep people safe.